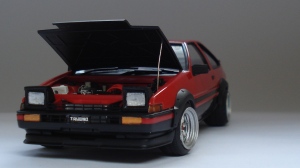 Today we are graced by this terrific turbocharged Trueno from Carlos Caballero! Now before we delve into the fabulous engine bay, lets take a little time to go over some of the changes Carlos has made to his Corolla. 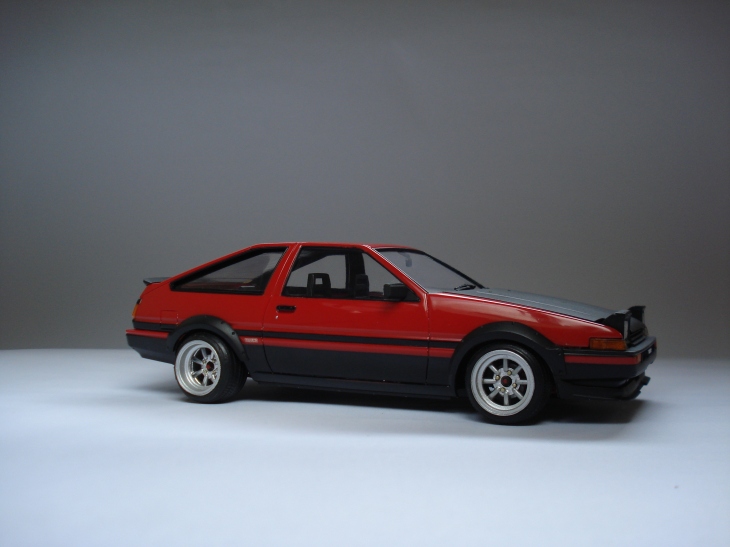 With the aim all along to turbocharge this machine. Other changes needed to be made to accommodate the doubled power output. Starting with a better way of laying that power down. Carlos decided on a custom set of silver 15” Watanabe wheels. But widened using a set of lips from 81’s TE37V wheels to increase the width and grip to the rear wheels. A nice touch being the gold wheel bolts and red/black center cap combo.

Having the wheels stick out wouldn’t be the most aesthetically pleasing of looks. So a set of overfenders were grafted to the car to house those super wide wheels. Aerodynamics are taken care of with the use of a zenki front lip and a deck lid spoiler at the rear. Seeing an AE86 in a two tone paint scheme is nothing new, but there’s a reason for that. They look so good painted that way!

Carlos decided on a classic darker red colour from Krylon, with a mix of Tamiya Black and Krylon Flat black. All bar the latter pop with his use of Ultra System 7000 Urethane clearcoat. The low key interior really works here. A subtle black scheme was used and works great with the exterior colour scheme. So shall we now take a look at that newly improved 4AGE engine? Why not!

Keeping in line with the entire colour scheme of the car. A black engine cover with red spark plug cables takes centre stage. With the intake and turbo equally pulling your attention in every direction of this immaculate engine bay. The blow off valve with its anodised blue look really does finish off the engine bay with that little bit of colour. A scratchbuilt bonnet stay was made to keep that subtle but effective flat black bonnet open to really showcase the work carried out on this engine.

With all those galloping horses, they need a suitable exhaust to charge through. An upgraded exhaust was in order with an enlarged burnt tip to do the job. The running gear haven’t escaped the fiery touch either! And judging by that weathering, this Trueno gets driven hard AND often!

A truly great looking 86 Carlos, thank you very much for sending this in!

You can also check out Carlos’ modelling journey as it happens on Instagram.