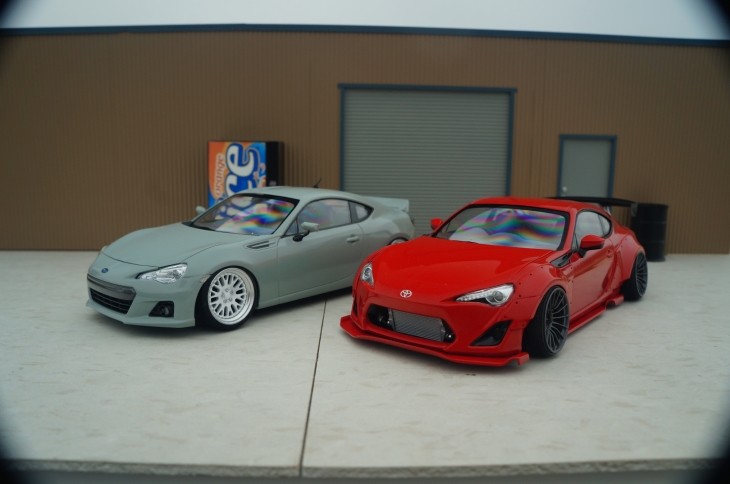 The first feature to start the ball rolling are these beautiful boxer brothers made by a very talented builder, William Morrison. He has kindly let me feature these builds and has included a little bit of spec about the two. So let’s start by taking a look at the BRZ. 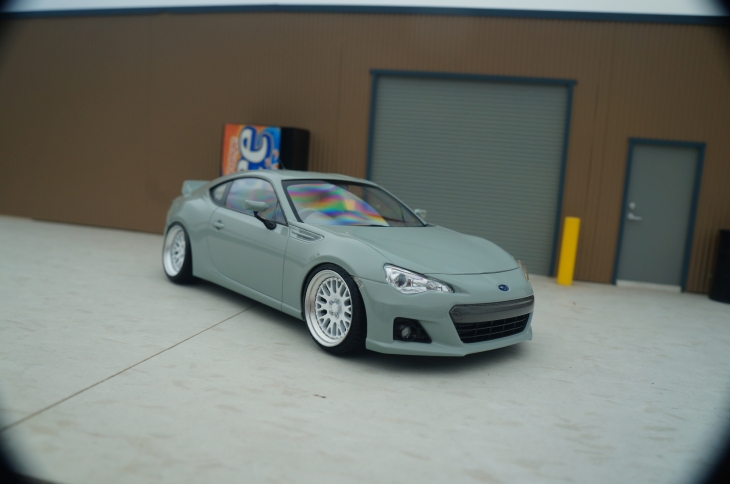 The Subaru has been very lightly modified and painted with Tamiya AS-29 Gray Green and clearcoated with Gunze Mr Clear. We can see that Will has gone for a subtle but effective look, not only in the colour choice, but also in the modifications. Incorporating many Eightyone parts, such as their Craftsquare mirrors and canards combo. 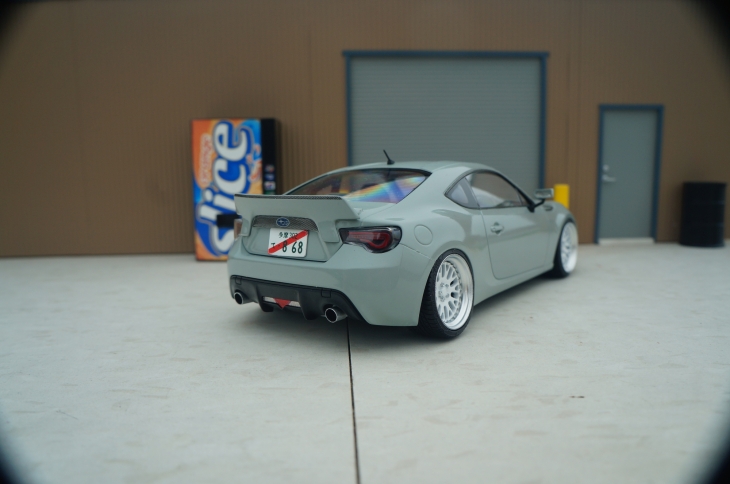 Moving on to the rear of the car we can now see the extremely realistic mufflers Will has built from stainless steel tubing. Adding to the subtle look of the car is an Eightyone Rocket Bunny V2 rear spoiler with little touches of Scale Motorsport Carbon fibre that coincides with the matching front bumper valance. With all these subtle goodies creating a unique and fresh look, Will decided on a set of Eightyone CCW Classics to complete the look. Another subtle addition were a pair of Toyota Supra seats to keep the driver in his place! The engine was left standard, but as we know, nothing is kept stock. Words from the man himself on that one! And he has gone with a completely fresh take on the BRZ/86 formula, so now let’s now turn our attention to the “other brother”! 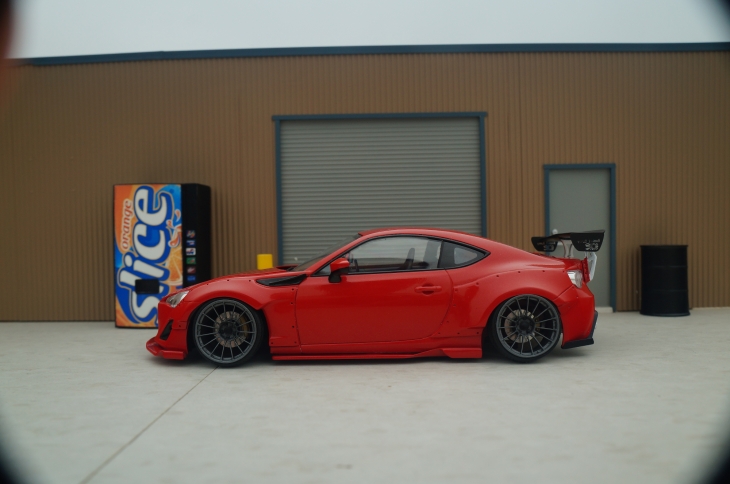 The Toyota GT86 is wearing a beautiful Tamiya TS-85 Bright Mica Red paintjob with Tamiya TS-13 Clear to make the colour pop. This brother’s bodywork is a little bit less subtle, wearing the Eightyone Rocket Bunny V1 kit with the optional photoetch wing plates for the ends of the spoiler. 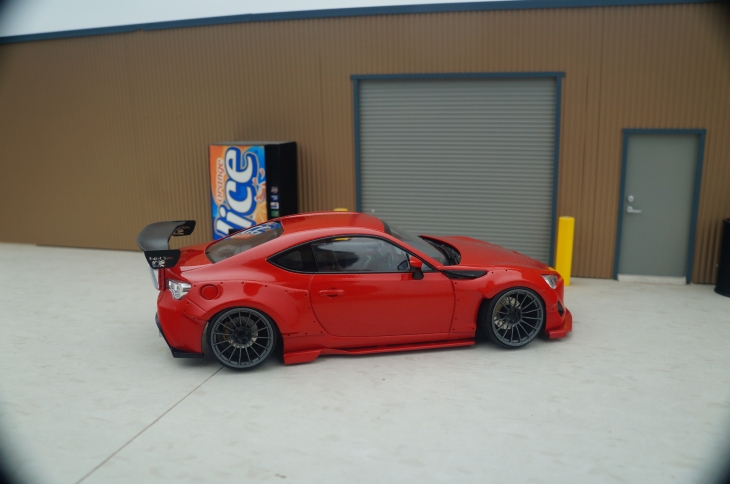 Will has raided Eightyone’s catalogue with their Enkei RS05RR wheels but wrapped them with some of Aoshima’s fantastic cambered tyres that were included in their recent VIP wheel releases. Moving on from the exterior, the seats were replaced with some resin Hobby Design items and other bits and pieces were utilised from spare parts collected over the years. Including brakes made by Scale Auto Style, who are now better known as C1 Models. Finishing off this build are a set of scratch built TRD inspired winglets in front of the side mirrors. 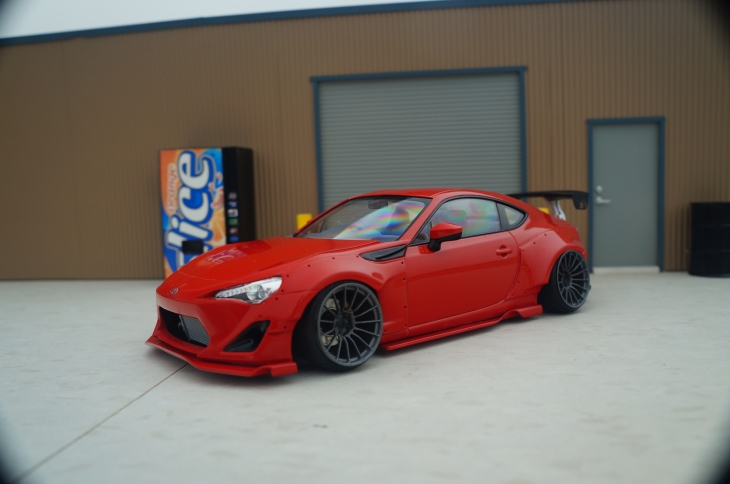 So who is your favourite sibling? The BRZ takes my vote simply for breaking the mould in the looks department. The build itself was originally meant to be a quick weekend activity that was stretched out over 2 weeks. The results are tremendous though, combining select parts to create a unique look that may divide opinion on the colour choice, but there’s no denying the uniqueness of this BRZ. 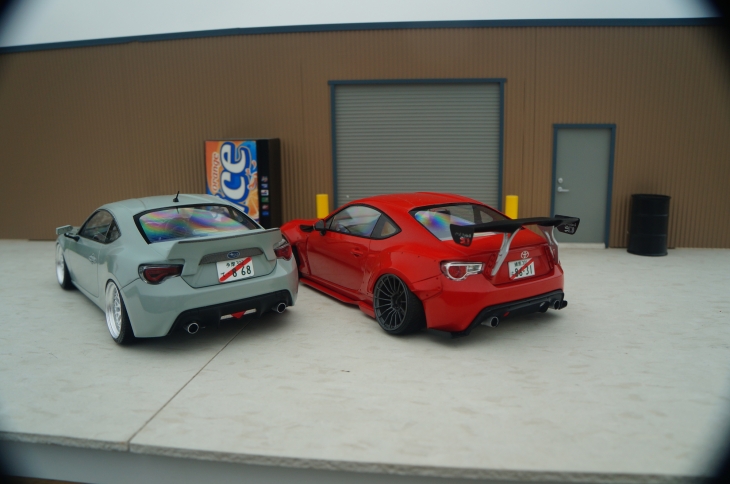 The Rocket Bunny GT86 is by no means a loser though, far from it! Again with its subtle changes to the tyres and additions from Will, he has created a fantastic and dare I say it? Subtle Rocket Bunny equipped GT86! Congratulations Will and thank you for taking the time to send the photos over and a spec list of the builds, I hope you enjoyed the feature my friend!

You can also view the video feature here:

Please email me at info@elpmodelling.com with details of the build and we can go from there!