Here’s a mean German machine from Jorge Ramos. Wearing a sophisticated shade of Tamiya TS-55 Dark blue. This Alpina B10 was then draped with Tamiya TS-13 over the top. Jorge then applied some hard graft with Tamiya polishing compounds to achieve that incredible shine you see here. 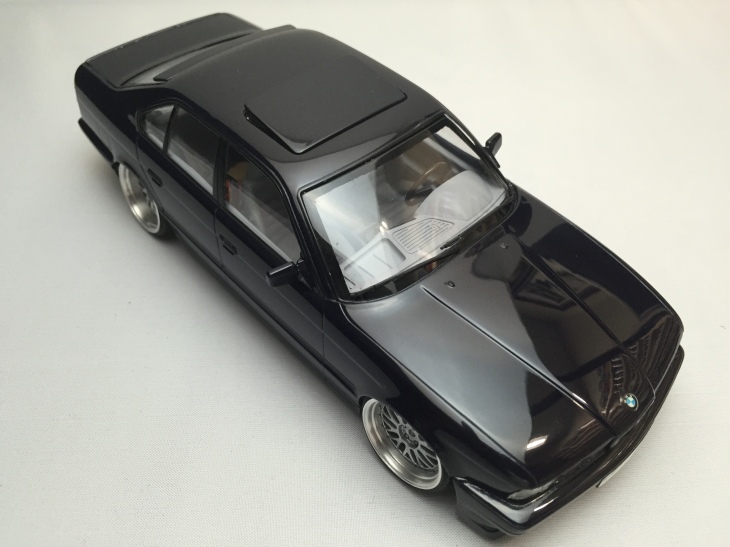 At first glance, you’d be mistaken for thinking this beamer has just had a wheel change and dropped to the floor on air-bags. Well you would be very very wrong! This car has so much more on closer inspection. Starting with a custom roof and rear lid spoiler to add to its sporty 4 door credentials.

Another subtle addition being an enlarged exhaust tip from a 2009 Dodge Challenger. Mated to the factory exhaust to increase that 6 cylinder howl that BMWs are known for.

He added a custom built moon roof too, which not only looks the part, but let’s you listen to nearly 300 raging horses on the open road!

Now I mentioned the wheel swap earlier. This isn’t just any set of 20” BBS LMs. These have been modified by Buckeye Scale Auto Parts. A lathe was used to remove the moulded in lip and replaced with a set of bespoke aluminium lips.

A stunning and subtle addition against the silver faced wheels with black bolts that really complete the exterior package. Peeking behind are a set of larger diameter Brembo brakes with matching decals to show that quality was always at the forefront of this build from the start.

The interior hasn’t escaped the level of detail Jorge is known for. Not only going for an OEM shade of grey, he then added the Accu Air E-Level remote on the centre console and a box of Nike shoes on the rear seats. Finally a set of photo-etched seatbelts really finish off the cabin perfectly.

A stunning build from Jorge and a massive thank you for sending the feature in!

You can check out more of his work at:

Go show him the love this modelling community is know for!

If you would love a custom set of wheels, be sure to visit Buckeye Scale Auto Parts!